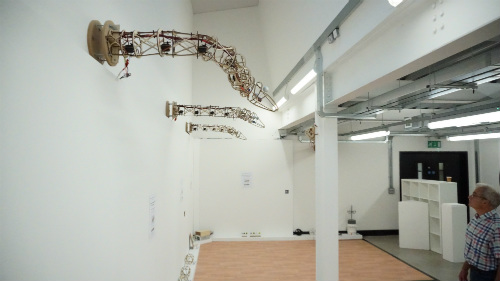 Please view this video: https://youtu.be/YN-6F7XuJs8
This is a large scale interactive art installation created by myself and Phil May, a software engineer.  It comprises five robot snakes mounted at high level whose eyes swivel, heads tilt and bodies bend to follow people moving beneath them. The snakes perform various synchronized dances when theyre not tracking people. They are endowed with numerous mannerisms giving them the characteristics of live creatures.
People enjoy interacting with the snakes. They try and work out whether and how the snakes are following their movements and perhaps then think more deeply about surveillance. In particular, we hope they will consider the many parallels online concerning their casual acceptance of their behavior being spied upon.
A first version of this installation was based on a tracking system comprising more than one thousand pressure pads on the underside of two 3m x 4m mats. It was a big hit at Plymouth College of Art's Graduate Show in June 2018 but the mats raised a number of problems - in particular they were difficult to transport and store and would only work in a particular size space.
Phil and I have now replaced the mats with a camera-based system that's much more portable and can be used in almost any space.  This was used to control a single robot snake on the Plymouth College of Art/3D Design Craft stand at the London Design Fair in September 2018.
The robot snakes have an "out of the lab" appearance - no skin, so the way they were made and how they work is apparent.  We see this as a way of demonstrating the power of technology as a means of artistic expression - how the movement it imparts transforms the way people experience art; they become active participants rather than passive observers.
We want to encourage other artists to experiment with electronics and software in their work.  With this in mind I've created a separate website -
http://www.technologyinart.co.uk
- that gives other examples of projects using technology and goes on to give tips on how to follow in my footsteps.  It also gives details of how I ended up collaborating with Phil May and developing The Snake Pit, along with details of how it works.