Skip to content
I'm participating in 30/30, an exercise under which I have to produce a work of art each day for the whole of April. If I fail to submit something I get kicked out of the exercise.  It's said that more than 1,000 artists are doing it this year.
Each morning I'm given a brief.  Following it is optional, but I enjoy the process of trying to find a way of responding to it.
Here's the briefs and my responses for the final 10 days: 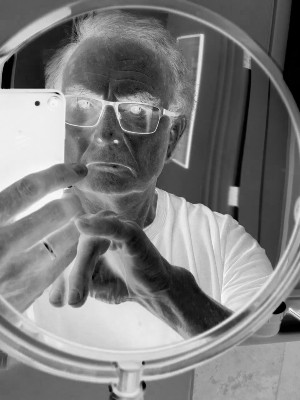 Title: White and Black
The focus here was on colour (or the lack of more than one) so I decided to take a picture of myself and invert the black and white.  This could be read as something to do with race, which it might be!

Day 22:  Do you have a guilty pleasure? Make a work from that 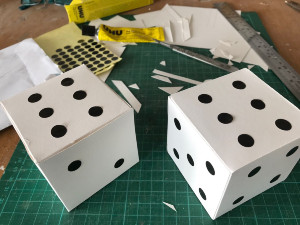 Title: Just my Luck
What's the connection with the brief?

I sometimes say that I've had a lot of luck in my life - more than I deserve - and the answer that sometimes comes back is: "You make your own luck." So I made these 2 dice, showing double 6, and placed them with the materials and tools I used to create them.

Day 23: Use wiki how to learn a new skill and make a work with it 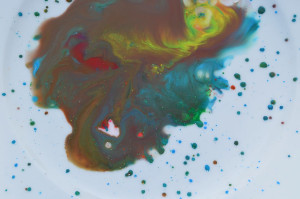 Title: Ink Time Lapse
https://youtu.be/zHZi_htN8dg
WikiHow is full of really mundane stuff so I decided to abandon using it and experiment with materials, perhaps learning a new skill in the process.
After a false start I hit on the idea of making a time lapse video of the interaction of different colour inks,  alcohol and detergent (see link above). I had to learn some new stuff about making time lapse videos using iMovie so I guess I fulfilled the brief.

Day 24: Could your work have another function? What would it be? 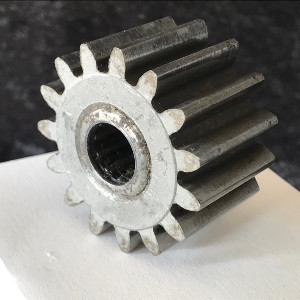 Title: Cog
Perhaps I should have called this: "But is it art?"   The word "function" led me to think about Marcel Duchamp and his "ready-mades" - notably his urinal.  I decided to replicate this - take a functional object and display it in a context that implied it was a work of art.  I'd been dismantling a defunct lawn-mower with the idea of using parts to create automata.  One of the parts was this cog, which I found really attractive.  So I cleaned it up and placed it on a plinth - one of the dice I made on Wednesday with the spots removed. 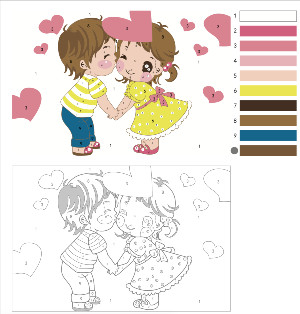 Title: Painting by Numbers
My sister Sonia looked up the definition of alter ego, which can mean an opposite side of a personality such as  Clark Kent and his alter ego Superman, and suggested painting-by-numbers as the opposite of my art. All I had to do was find a subject matter that was equally irksome. 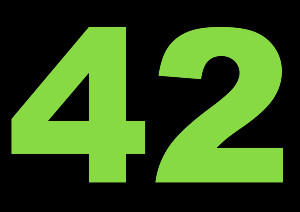 Title: The Answer
I wanted to find a way of expressing "life" as that's what inspires me.  I considered an image of the Earth from space and a video of Louis Armstrong singing "What a wonderful world" - too obvious.  I decided to go with 42 - the answer to "the ultimate question of life, the universe and everything" in the Hitchhiker's Guide to the Galaxy.

Day 27: Make a work to give to someone else 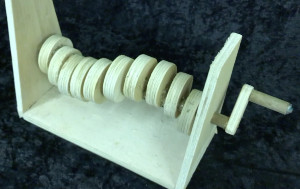 Title: Caterpillar Automaton - Work in Progress
https://youtu.be/euaJUkJWm0I
I tried to make a caterpillar automaton but ran into some problems and decided to submit what I'd done so far as work in progress.

Day 28: Write a review of one of your previous works 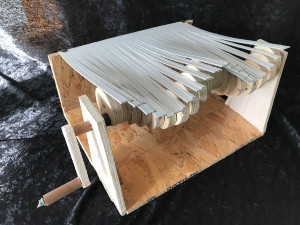 Title: Moving Wave
https://youtu.be/S6CfGfxwHzw
I "reviewed" my progress on yesterday's caterpillar automaton and decided metamorphosis was in order - I'd hit some technical snags and the caterpillar idea itself wasn't particularly innovative. So I reused parts of it to make this moving wave.  Quite pleased with the use of sheet of cardboard to enable me to keep all 40 "fingers" aligned. 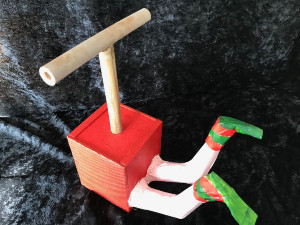 Title: Blow Your Socks Off (Revised)
https://youtu.be/KSkIpombpdU
I also "reviewed" my "Blow Your Socks Off" automaton submitted on Day 15 of 30/30.  "Reviewed" -  I fitted fatter legs, made of card, over the thin bamboo ones, I changed the socks so they were foot shaped, and I took a slow motion video of the socks being blown off because that only last a split second.  I couldn't get over the issue of the feet stopping the socks coming off, so this is now "Blow your socks (and feet) off". 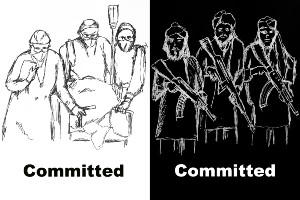 Title: Committed
I almost wimped out on creating this image because I wasn't sure my drawing skills were up to the task. Then I realised that the brief was calling on me to be brave.
Not too happy with the proportions of the left hand nurse's arm - spent the evening wishing I hadn't been in such a hurry to submit it - but I'm pleased with the overall idea.

Day 30: Try making that work you've been wanting to make over the past month and never got round to making Title: On a Roll
https://youtu.be/93Hh3Ssm0UU
I've been toying with making an automaton whose eyes follow a ball rolling to and fro in front of it - inspired by a piece called "Thinking" by Robert Race, an artist I like - he makes simple automata, often using found objects.
Got the ball rolling today - the eyes will have to come later.